This novel written by Daniel Defoe in 1719 is considered to mark the beginning of English novel-writing. It is one of the greatest books ever written and will completely enthrall readers and listeners alike. If you have only seen movies from the book, you are in for a big surprise. So get comfortable, turn off the TV and listen to the original ‘lost at sea’ novel.

Also, you can right-click the episode links below and save the MP3 files to your hard drive.

Young Robinson Crusoe decides he wants to leave his father and mother to go to sea. He refuses to take their advice and sets sail. 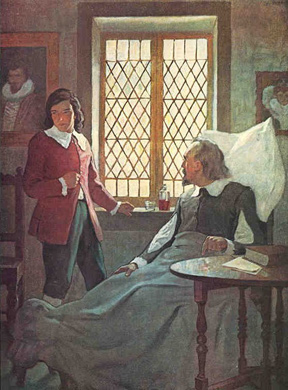 Crusoe learns more of what it means to be a seaman. He is captured off the west coast of Africa and made a slave.

In this section of the novel we get into Defoe’s treatment of the issues of slavery and race. Reading the early parts of the novel, one might get the mistaken impression that Defoe is intolerant of other races. This is not the case. One must remember that he was writing his book before 1719. His continued treatment of the slavery issue throughout the novel is many years ahead of its time and shows him to be a deeply thoughtful and serious commentator on the social injustices he saw around him.

In this section of the novel, Crusoe continues making good on his escape. He then makes a series of fateful decisions as he tries to get on his feet and make a life for himself.

Defoe begins to get into the slavery issue and how it plays the major role in Crusoe’s single most important decision.

Crusoe experiences a terrifying shipwreck and is the only survivor. His struggle for food, water, and a place to sleep begin. No matter what situation Crusoe finds himself in, he never stops thinking. 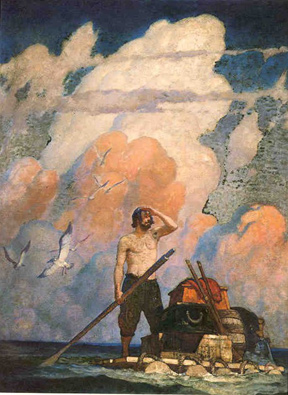 Illustration is by NC Wyeth (1920)
Crusoe takes supplies off his shipwreck on his hastily built raft.

Crusoe explains how he made his own tools and built his home on the island. He begins to show us his journal entries which track each day’s activities. He goes hunting and, much to his surprise, begins to use agriculture. All his mental efforts are bent toward making his survival upon the island long-term. He even considers what he will have to do to ensure his survival when his health and strength begin to fail. The inclusion of the journal entries, which actually repeat some of the very things Crusoe has already told us, are a striking literary device on the part of Daniel Defoe. Pay attention to how the voice (I mean the literary voice, not the audio voice!) of Crusoe changes ever so slightly with these journal entries as compared to the rest of his narration. Crusoe also begins struggle with religious thoughts and wonders whether some sort of divine providence is behind his being the sole survivor of the shipwreck. 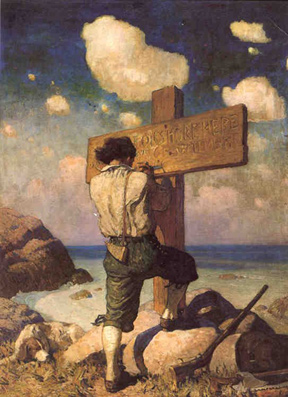 Illustration is by NC Wyeth (1920)
Crusoe carves his cross on the beach to keep track of passing days, weeks and months

Crusoe continues to offer the reader his journal entries, describing how he brought supplies from off the shipwreck. He battles sickness and finds a way to speed his recovery. He begins to read a copy of the Bible that he finds in one of his chests. This causes him to ponder the nature of his deliverance and he begins to read the book regularly for the first time in his life. Defoe is here beginning his fascinating analysis of a human being’s place in the world and how hardship can lead a person to question the very nature of existence.

As Crusoe recovers from his sickness, he begins to venture farther abroad on the island, discovering things that will assist his survival efforts. 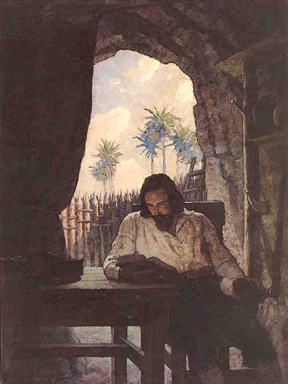 Crusoe details how he learns to grow crops that will help sustain him when his ammunition runs out. He journeys to the far side of the island, finding better land and more plentiful game there. He describes the difficulties overcome in learning to weave baskets and cut lumber from a tree. He also writes about his religious thinking and how he begins to come to terms with his solitary condition.

Robinson Crusoe struggles to harvest his corn, make bread, build a boat and sew some clothes. The efforts he makes are constantly set back by mistakes and errors in judgement. He deals with his lack of expertise in the various arts that he must call upon with a certain amount of humor. Pay attention to how Crusoe constantly monitors his state of mind and is ever willing to discuss his mistakes and to poke fun at himself. 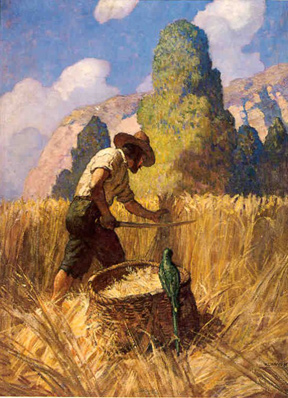 Let’s get on with our story, shall we? It’s a good story and reading it is a lot of fun. Difficult, but fun. Defoe’s language is up and down and backward and forward. It makes you think fast. Try picking up the book and reading any part of it out loud and fast. It’s tricky. But it’s a very good way to learn more about how Defoe’s mind worked. Amazing. Are you starting to wonder why Crusoe constantly reminds us of things and says things like: ‘As I told you before,’ or ‘As I said earlier?’

He almost insists that you follow the correct sequence of events, but he skips ahead in order to achieve a much more important goal. He wants you to follow along with his state of mind. That’s why his story-telling language is so twisty and folds back on itself so often. This is certainly one of the most fantastic things about Defoe’s novel. Its obsessive focus on the man’s state of mind sets a precedent that influences almost all of literature following Defoe. It is really this that makes the book so modern.

This story holds surprises for us. Stay tuned until next week… 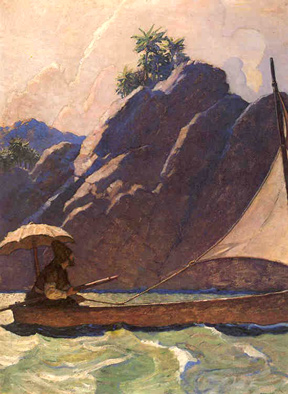 Our lone character, Robinson Crusoe, succeeds in raising his herd of goats and learns to use them for meat, milk and cheese. But his shocking discovery on a beach shakes his foundation and fills him with dread. 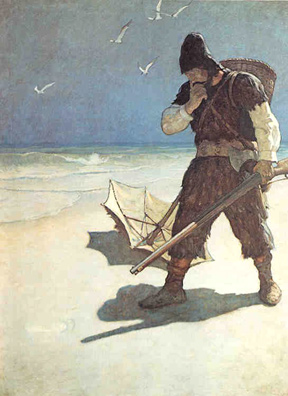 Illustration is by NC Wyeth (1920)
Crusoe makes a shocking discovery

Crusoe makes another shocking discovery and sets himself on a course of action that leads him to one of the book’s most interesting passages. It is here, in Crusoe’s struggle with his own outrage and his ideas about what makes for civilized behavior, that Defoe begins to turn the novel in a new direction. He is examining the underpinnings of Western civilization. What makes a person civilized? What does the right of self defense really mean? This kind of thinking and questioning is perhaps somewhat lacking in certain countries today. Notice also how religion, for Crusoe, seems to have a moderating, calming influence. He resists using it to justify himself or his actions. 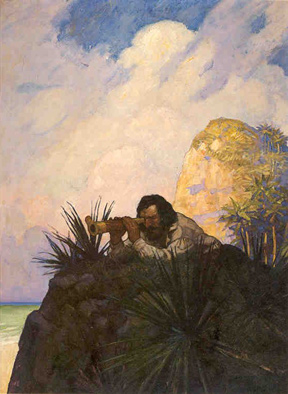 Crusoe worries about being attacked if his presence is discovered by cannibals who visit the island. He finds a spectacular cave and then, during a night storm, hears a cannon shot.

Cannibals come to Crusoe’s island and make him believe there is a possibility of confrontation. But in this section of the book Crusoe meets his companion, Friday. He considers this man to be his servant and slave. An odd assumption since it is actually he, Robinson Crusoe, who is the intruder in Friday’s part of the world. This must have something to do with the way certain nations operated in those days and, in some cases, still do.

At any rate, Crusoe begins to teach Friday English and becomes more assured of their friendship. 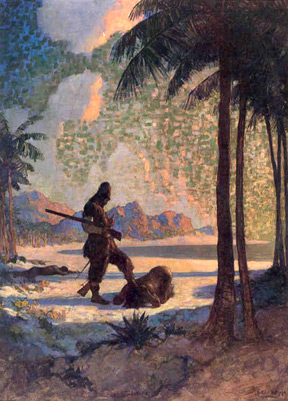 Illustration is by NC Wyeth (1920)
Crusoe meets the man who becomes Friday.

Crusoe builds his friendship with Friday, teaching him english, Christianity, hunting with a gun, and working with tools. The two men develop a deep and trusting bond once Crusoe gets over his struggles with suspicion and doubts about Friday’s intentions. We find ourselves at that part of the novel that best illustrates what many critics of Defoe’s novel say is a glorification of English colonialism and empire. To be sure, that is part of what is going on in the book. However, there is more to it than that. Defoe, at times, seems close to sowing seeds of doubt about the English world he lived in and its beliefs about its place in the world. Pay very close attention to the conversations between Friday and Crusoe. They move in directions entirely unanticipated by Crusoe. He is constantly surprised by how loyal, intelligent, and civilized Friday turns out to be in his very deepest nature. 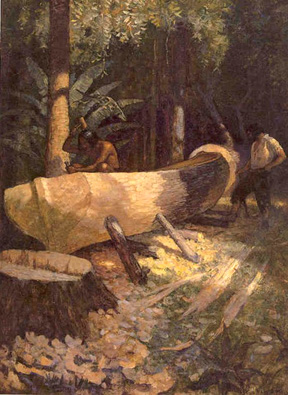 Illustration is by NC Wyeth (1920)
Crusoe and Friday build a boat.

Robinson Crusoe and Friday get many surprises as they battle cannibals. The action explodes as they are forced to think and act quickly to save lives. Crusoe continues to be amazed at the strength of Friday’s character and his incredible loyalty. 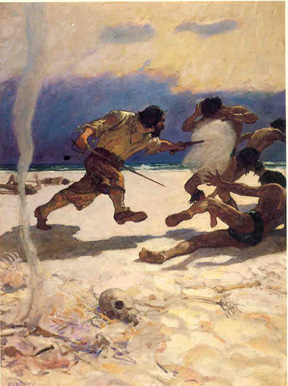 Illustration is by NC Wyeth (1920)
Crusoe battles the cannibals on the beach.

Crusoe and Friday see what looks like an English ship. But what does this ship bring? This is an action-packed section of the book. Crusoe uses every bit of his cunning and skill to defend himself and Friday while never ceasing to maintain his hope of rescue.

Robinson Crusoe and Friday finally have a ship and a way off the island. Crusoe relates his journey home and how he resolves the outstanding issues he left behind in his life. He meets with one final harrowing adventure on his journey home and uses it to lead into the final thoughts of his great tale. So ends one of the greatest adventures ever written and so began the great art of the English novel. Daniel Defoe created a character that has influenced every writer and every reader’s imagination since he wrote this incredible book.

It has been an uncommon pleasure to read this difficult book and to make my way through the unusual language of Mr. Defoe. Perhaps by reading him, one can learn to think a bit like him. With great language comes great subtlety of thought.

By the way, Defoe did write a sequel to this book. It’s called ‘The Farther Adventures of Robinson Crusoe.’ Perhaps a podcast of that book should be… 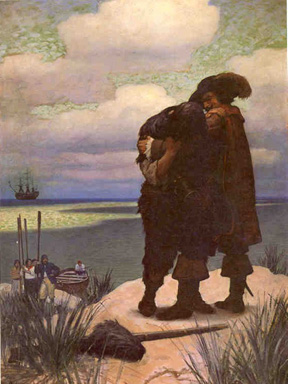 Illustration is by NC Wyeth (1920)
Crusoe is grateful to the ship’s captain for his opportunity of rescue.

Visit our Pirate area to learn all about
the Golden Age of Piracy in the Caribbean.