elcome to a land of adventure, quests, potions, gems and castles. Magic Quest is a unique, totally free, 3D, Flash adventure game for all to enjoy. 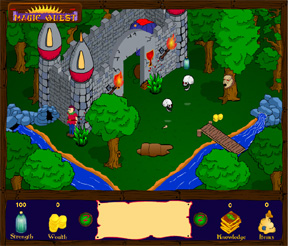 attle ogres and ghouls for your very survival. Search for gold and gems with magical powers. Find secret knowledge and figure out the hidden clues. Then sail the seas on your heroic quest to save your kingdom from the dark wizard, Ravelor.

ecause kingdoms are ancient things, this story happened long ago.

In the Land of the Wooded Isle, high atop a stone mountain, dwelt the Jeweled Kingdom. Because the land was very rich with jewels of every kind, many a foreign king, emperor or wizard had tried to take the Jeweled Kingdom for himself.

But the kingdom had a fine, honest ruler named King Thorn. He indeed was a thorn in the feet of his enemies. For not a one of them ever succeeded in taking the lovely kingdom on the Wooded Isle.

After many years and wars, King Thorn grew old and searched about for an heir to his throne. You see, King Thorn had no son to follow in his footsteps.

One day, the old king fell gravely ill and no one in the Jeweled Kingdom knew what could be the matter with him. He became sleepier and sleepier with each passing day until he was quite unable to open his eyes at all – even during the daytime.

It was soon noticed that people all over the kingdom were falling into a deep sleep.
A very old shopkeeper told the story of an ancient lost kingdom that had fallen under the spell of an evil wizard called Ravelor. The lost kingdom had slowly come under his dark rule until it was but a wasted place, inhabited only by Ravelor’s evil minions or those unlucky inhabitants caught in his powerful spell.

According to this old man, many explorers had ventured into the lost kingdom never to return. The reason, he said, for their foolhardy journeys, was treasure. But the real treasure, unknown to most who threw their lives away for gold, was the Water of Life.

This magical water had the power to break the spell of Ravelor and restore health to the dying King Thorn.

A servant, hearing this tale, stepped before all the king’s advisors and said, “I will journey to the lost kingdom and bring back the Water of Life to save King Thorn and our Jeweled Kingdom.”

The king’s advisors stared at him in astonishment. But the eager servant stood firm in his resolve and they had no choice but to send him on his way.

“Tut!” said the King’s Minister of Mines. “We shall never see the likes of that foolish oaf again.”

“Quite,” laughed the King’s Secretary of Ships, “A fine servant to ghouls and ogres he shall make.”

So, off the servant went to the lost kingdom to find the magical Water of Life that would save his king and his land.